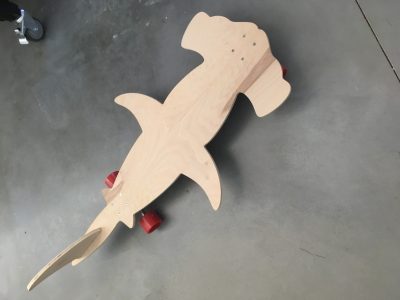 I don’t skate. Well, I did for a minute in eight grade. For a few months my friend Greg Karnes and I clumsily tricked off the steps onto the driveway and into the cul de sac.

Fast forward 15 years and I’m walking to lunch with co workers when hooligans, I mean students, long board past. I thought, ‘hey, I bet I could do that!’ Not skate but make! So I cut lunch short and went back to the Maker Space to start sketching.

The first board was form not function shaped like a hammer head shark the tail fin was so big it was impossible to push off. But, it looked neat, and that’s a pretty good start.

So, next was version two, all function and hardly a form. This became the template for a much bigger project. A series of workshops where I would teach students CAD (a version of 3D designing), a little cnc machining, and some other things too. I thought maybe I would get 5 or 6 students interested, it wasn’t for credit, it was going to be time consuming and I was asking them to learn a bunch of new skills using what little precious free time they have. But, it turned out to be a popular idea. All told 27 students made long boards with me this semester.