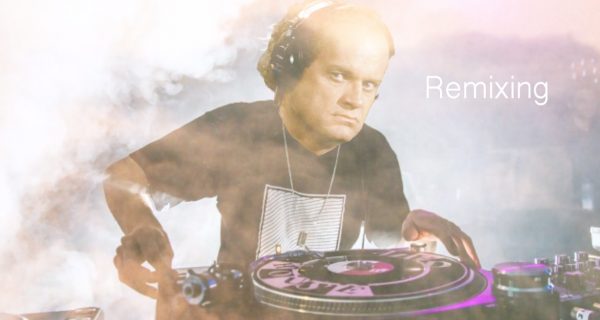 I did a thing, and then I realized where it came from. The thing was mine but it was also someone else’s.

Accidental recreation. Purposeful remixing. Whatever it is. It’s a part of the creation process. No idea comes out of thin air.  I think academically most can agree with that and yet many of us also think creativity or genius is a mystical gift. It’s magic. I know I did when I was younger. I remember writing music and someone would suggest it sounded like Modest Mouse. Which, it absolutely did. I was influenced by them A LOT. But, at the time, I was writing my own music and thought I had my own sound and wanted others to think that too. Something had to be originally mine in order for it to have value. Even now I can’t help but be a little discouraged if I find out something I am doing has already been done.  Yet, in reality, in everything we do, we are all building from previous inventions, discoveries, and ideas. We are all always repurposing and remixing.

This is a tough pill to swallow for many creative people because calling everything a remix eats at a fundamental belief of our understanding of ownership and fairness. In America our creations are protected by law. And also protected by some deep understanding of what fairness is. It is fair to most that if you have a original idea you have rights to it. Or you have rights to copyright it. The belief that we can make or think of something then become prosperous by it is an idea deeply rooted in what it is to be American.

So when is it our original idea and when is it borrowing and when is it stealing? Most people seem to have an internal barometer that tells them when something crosses the line into plagiarism or stealing. In the case of Jeff Koons, a famously loathed artist, at least folks I hear from, think it is clear he is stealing.

But where originality exists and where influence and repurposing rest is a complicated thing to unpack. Kirby Ferguson has a series on this subject called Everything Is A Remix which is worth a watch whether you are on the fence or not about originality existing.

For me, I bounce back and forth between wanting to declare that there is no such thing as uniqueness and then thinking that maybe this hodgepodge of different experiences we all have inherently make us unique. How could they not?

Anyway, I set out to write that it is okay to remix and reuse. In setting up this text I maybe got a bit off track. So here I am finally saying I think it’s okay to borrow because we all already do so all the time. Like Kirby Ferguson says in Everything Is A Remix we all copy and paste and redo and remix all the time. It’s our folk art.  So I say, borrow, experiment, try things out, go nuts! Just be careful because sometimes people do sue (Disney for example enjoys suing people).

As a teacher I see quite clearly that what I say and do around my students is redone by them. It is how students learn. I’m completely fine with them borrowing and reusing what I’ve done because I got my knowledge from somewhere too.

I think, if you will permit me to stand on top of a desk and speak authoritatively for a moment, that we have to let go of our own notions of the artist as a gift because divorcing ourselves from this idea of ownership over ideas and ownership over our creations gives us room to help others, be less concerned over credit, gives us more time to experiment, and more room for collaborations. We have to let go of our egos and experiment and remix a little bit more!

More on that some other post. And maybe I’ll also write about the problems of not crediting and how we need to protect artists. Because I believe that too. What can I say, I’m just as contradictory and confused as every other human being.

One other little thing. There’s a podcast called Dissect I listened to recently. It does a really nice job of dissecting the process of sampling which is a production style in music often done in hip hop. I think it fits in to all of this. Usually I hear some frustration that people sampling are not making true art and don’t have skill. This podcast does a really good job of suggesting sampling/remixing is an art. Check it out here: